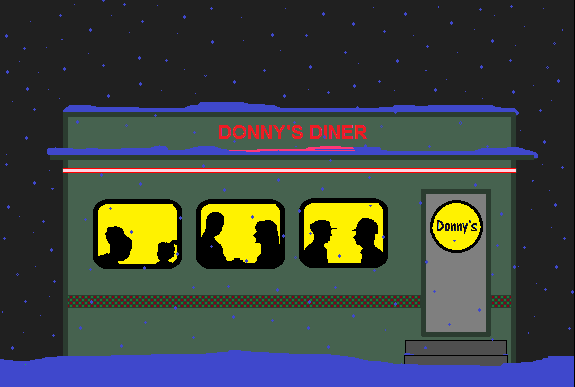 As the Tail-lights Disappear

David watched the snowflakes accumulate one atop another on the windshield of his car through the diner window. Heat rising off his plate of scrambled eggs and steak warmed his face. The waiting is the hardest part. It was just David, the waitress, the cook and three truckers arguing about football. Aside from the snow, the bus station lights, and the headlights that passed, everything outside was black. The snow was like a gossamer curtain, obscuring the bus station on the other side of the highway. David lifted up the stainless steel napkin dispenser and checked his reflection. He put it down and straightened his tie. His eyes followed every pair of headlights that penetrated the falling snow.

A bus pulled in, exhaling its passengers into the yellow glow of the sodium-vapor lights mounted on the concrete wall of the terminal. The travelers either stayed on the platform, waiting, or diffused into the parking lot, toward the line of tail-lights, waiting cars and waiting arms. One lone passenger dragged her suitcase through the salt and the snow and stood on the shoulder of the highway. After looking left then right then left again, and staring down the highway, she tucked her chin and ran across the street. David met her at the door, taking the suitcase handle and pointing to their booth.

“I’m starving,” Maryanne said, pulling the wool hat off her head, her curls falling every which way.

He pulled up his sleeve and looked at the wristwatch his wife had given him four birthdays ago.

“What time is your next bus?”

“I wish I could drive you.”

She looked up and smiled at him. The waitress came over, plucking the notepad from her apron and the pen from behind her ear. Maryanne ordered blueberry pancakes, with a side of sausages and a cup of coffee.

David reached across the table and took her hands in his. David leaned forward and held her cold fingers near his mouth, kissing them and exhaling on them. Her nails were cherry red, like the paint job on the sports car of an accountant undergoing a midlife crisis. David kissed each fingertip.

“I’ve missed you too. How are things?”

“The same. Too much of the same. I haven’t spent more than a week in my own bed this month.”

The waitress placed a cup of coffee before her, and beside it a saucer of milk and creamers. David watched Maryanne pour the sugar. She made tiny circles with her wrist and the white grains sprinkled down, landing in a swirl then dissolving on the coffee’s surface. David heard country music playing softly in the kitchen. He hadn’t noticed it until watching Maryanne’s ritualistic coffee preparation.

“How are Kim and Matt?” she asked, peeling the top off a creamer and pouring it in the same swirl motion.