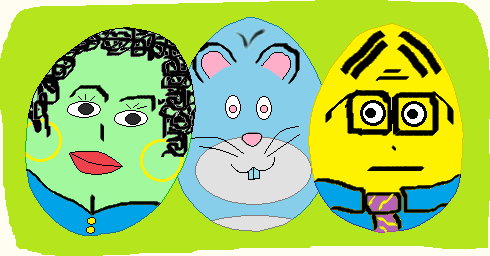 On the Saturday night before Easter Sunday, my husband Toby and I drive to the Suffolk Wal-Mart and stand in line at the customer service desk for what seems like hours. He stands there in his jeans, college T-shirt, and worn-out sneakers, and I’m in my denim mini-skirt and sorority sweatshirt.

It’s been almost ten years since we graduated and got married, but the alumni blood runs deep (sky blue, to be exact) in both our families. Toby, short for Tobias, holds a flimsy white plastic grocery bag in his hand containing a used early pregnancy test, the EPT.

In twelve hours from now the Easter Bunny will make his rounds but it already seems like the kids we see running around the store are all sugared up. They run all over like screaming banshees, checking out what candy’s left on the store shelves. There isn’t much. There are definitely no Cadbury eggs or solid chocolate rabbits left this late.

Suddenly, I’m having doubts about having a kid, seeing other people’s kids behaving so badly. Were they ever good cute sweet babies, and if so, what happened to change them? When?

I must be getting old, I think, eyeing the “Photos with the Easter Bunny” diorama at the front of the store. Since when did Easter get to be a major commercial holiday? Candy is one thing, baskets are another, but why do they have this giant light blue furry mascot parading through the store?

Even though his bunny costume happens to be our school colors, I’m still creeped out. And why is he making a beeline for me? I try to hide behind Tobias but the oversized rabbit isn’t having it. He grabs the shopping bag from Toby and peers inside at the purple and white EPT box. Just long enough to read the label.

The rabbit hands the grocery bag back and puts his paws up in the air. He seems to be trying to tell Toby that he’s backing off. But then he turns to me with his thumb up, like a hitchhiker, before pointing it down. He's questioning: which is it? Thumb up or thumb down? Are you having a baby or not?

I look up at his face as my eyes begin to fill with tears. He stares at me with features that remain expressionless. Of course. They are sewed on.

Stoicism, even if painted on, would be preferable to my current level of frustration. What kind of a person, in a bunny suit or not, asks a complete stranger something so personal? The silly costume must endow courage, or disguise fear.

I shrug in response to the rabbit's need-to-know. Apparently, he can’t speak, so why should I? He leans over me and envelops me in a gigantic furry hug, as if to say “Better luck next time.” He moves on, giving a high-five to the next person he meets. Since when did the Easter Bunny become so surreal?