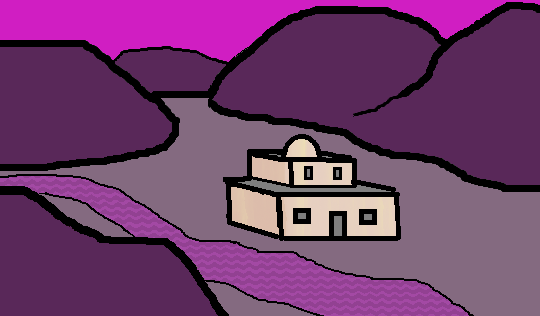 Yejun felt the cool evening air tearing into his face as he hopped from the thick oak branch and into the Amissa Forest. He just made it over the tall metallic fencing. He shielded his face with his arms as he braced for impact with the thorny shrubbery. He thought of his daughter.

The shrubs cracked as he plunged through. He sat up and caught his breath. Multiple thorns pierced his studded leather sleeves. He yanked each thorn out of his shoulder.

He felt a chill pulsate through his body as he moved through the forest. Everything was darker here. The forest looked as if it was painted in charcoal.

The river lay north. Yejun remembered that much from his childhood, before the Council decided to seal the forest. He could hear the faint sound of the current in the distance.

The forest changed as he advanced. The trees no longer bore leaves. Violet crystals projected angrily from the bark, tinting the forest an unnatural colour. The colour was just like the village’s water supply — like the thick purple flakes that had contaminated Yejun’s daughter and nearly half the village.

What has happened here?

The Amissa Forest was once an unthreatening place. Yejun never understood why the Council closed it off several years back. Could this crystal infestation have been the reason? Didn’t they ever think to mention the matter to the villagers? Yejun jumped over a cluster of purple shards that stabbed the infertile soil.

Scaling a steep hill, he kept an eye on the infected ground, navigating around anything resembling a crystal. Halfway up, he halted. The hill was bleeding. Some light purple substance oozed from the ground, encircled his boots, and streamed down the hill.

From here he could see the stained waters of the river. Was it even water anymore? This was what his village had been ingesting for the last...how long? A few months? Or had the change been a longer, slower process, like a virus or disease?

A solitary structure, a temple, the colour of faded onyx stood by the river. Yejun walked towards it.

Yejun ran his hand along the forehead of his daughter Ji-su. Her flesh burned. Sweat trickled down her temples, wetting her young face. He cradled her in his arms and gently rocked her from side to side.

Soojung stepped into the house. She carried a bucket of freshly picked vegetables. “Looks like you got her to sleep,” she said.

Yejun eased his daughter into her wooden crib and tucked her in. “I want to see her grow up.”

“Don’t talk like that.” Soojung placed the vegetables on the kitchen counter and grabbed a pot from the cabinet. “I’m going to fetch some water. Then I’ll fix us dinner.”