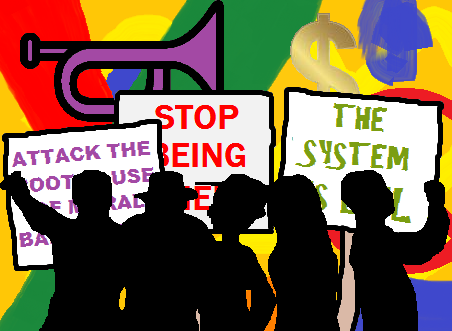 This morning in John’s condo the TV is abuzz with news of the demonstration. I can hardly believe that the inequality of wealth distribution is the ‘new’ sexy topic. Thousands of people are expected to gather at the corner of King and Bay to march in its honour. The mayor reiterates that people have the right to demonstrate peacefully, thereby sitting on the fence between the establishment and everybody else. Members of Parliament will march next to labour leaders, while big bank executives warn their staff to “prepare for the worst and hope for the best.”

Ancient instincts begin to rumble in me. They awaken convictions I thought were forever gone. I must participate in this global day of action. When I was younger, back when the fire still burned in my belly, the poor versus the rich was my call-to-arms, my raison d'être. My career, my photographs, my paintings — all called attention to the inequalities in this word. Back in the 90s, my friends and I were New York’s new bohemians, restless, opinionated and deadly set against the power of big business. We cared. We were poised to change the world — but nobody listened. Nobody purchased our crappy art.

I squint at our 85-inch-screen TV to read the placard one of the marchers wields: I got 99 problems but being rich ain’t one of them, it says.

I cry, not because this describes my present situation but because three decades ago, when I was that young woman holding the placard, it wasn’t 1% of the population that owned the rest of us, it was 8%, and this brings us closer to totalitarianism. The desire to march wells up with my tears.

“John, let’s go to the march,” I say, turning up the TV volume. “Let’s go occupy Toronto!” I raise a fist into our condo’s Febreze air and feel the glory of my younger self surge up once more.

John doesn’t go for it. It isn’t his thing. He is a working class hero who expects nothing from government and wants nothing to do with it. He cannot bother about life’s larger issues when he is busy bothering about doing what is right for his immediate family, and he does that magnificently.

“C’mon! It will be fun!” I insist. “I’ll just take a few pictures at the march and we’ll come right back.”

As if speaking were a chore, he yawns, “You are such a dreamer. Look at those goofs.” John’s face wrinkles like a tossed piece of paper as he points at the TV screen. “What are they trying to accomplish?” He goes into the kitchen to refill his coffee and a dent on the seat of his chair pops.

“It’s cold outside anyway,” he shouts from the Keurig coffee dispenser.

My reply catches both of us off-guard because I have complained about the cold for all the seven years I have lived here. I never promised I would get used to Arctic air. I am allergic to winter.

“I’ll go by myself,” I whisper. I have accused John of being a Neanderthal more than once, but he has a big heart and God knows, after all the losers I have married and divorced, he’s a keeper.

“Don’t be ridiculous!” he yells, whisking the sugar spoon in his coffee more vigorously than usual. “You’ll never find parking.”

I know my life has taken a sharp turn, but I must insist on keeping true to my principles. “I’ll take the damn subway,” I say, trying to make believe I can fend for myself. Proud.