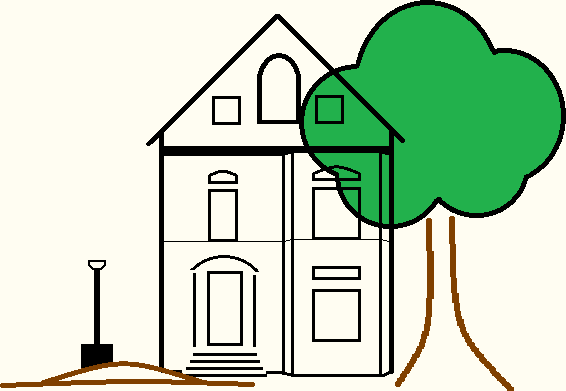 Amus Schulman put one foot on the shovel and cut gently through roots and wormholes into the cold earth. The earth was hard, but giving. The thin roots of the young summer grass pulled haphazard clumps of dirt away with them as he leveraged, lifted, heaved. They never came away in the same way, though the grass was uniform enough in daylight, and one crepuscular sea at night. Under the moon, itself behind clouds, the lawn did not gleam silver, but stretched grey like a slippery fog under his bare feet. He looked around, surveying the site — were her footprints still there? He straightened himself, resolved: there was no evidence of this. He could see nothing, would break nothing by disturbing the soil, and so he returned to his task. His toes were wet, but clean.

The little house, he could hardly look at. In the big house, a narrow red brick Queen Anne bought four years ago, one parking spot, unfinished basement, the lights were off; throwing the dirt over his shoulder each time, he checked. She was still asleep, or pretending. Playing possum. She would not wonder at his absence, or check the window to see where he was. She lay there, tiny and still as a stone, brown eyes staring at the inside of her eyelids. He was thankful that she wasn’t watching him, her husband, covering himself in earth in the dark.

His digging scraped against the silence; could anyone see him? He could see the old straight street with its brick houses with damp basements cracked by old maple roots — the Windsley-Holmes across the street, with two girls around the same age as their own, the Friedmans in the left half of the semi on the corner. All smugly silent, lights off.

Awake, he was alone.

The smaller house, the dollhouse, sat on the lawn, too light to fold the grass underneath it. Amus wouldn’t look at it, yet he worried that it might blow away. The impulse seemed instantly absurd to him: the air was still, nothing needed his protection now. In the little house, he was still in bed next to his wife Sarah, their wooden shins, knees and thighs touching hers — she was always sandwiched between them, elbows in his back. She made sure her little wooden family said goodnight every night like this. The real one, too.

He took the earth in his backyard apart, creating a square hole and wetting his legs up to his knees. Deeper, deeper down, he did not pause. Soon, he hit clay, which slid against his shovel like flesh, soft in some places and hard as bone in others. He took his shirt off, casting it on top of his dirt pile. He dug until he had covered the shirt, stepping down into the hole he had made, waist-deep, closing his eyes at the cold shock of the newly naked earth on the soles of his feet. The veins on his arches prickled. Sweat needled through his temples. Blisters that might turn into calluses formed on his fingers. His task was nearly complete, but he kept cutting and scraping, wet hands slipping on the handle, neatening the hole.

Amus hit roots. He couldn’t go through them — they kept her favourite tree alive, the oak by the fence, darker now than the starless sky behind it. Deep as he could go. He stepped up, then sat on the edge of the hole, tired, trying to haul himself back to the grass. The dollhouse stared at him. He could not touch it; it was electric with memory.

Would it collapse under the soil? Would the wooden dolls be disturbed? He pictured them gasping for air as the dirt closed in around them. Feeling possessed, he wondered if, under the dirt, drowning, they would feel pain. What would they eat? Should he restock their small pantry? Saran wrap! He would tape off the windows, and the inside would not be touched. The kitchen. He stuck the shovel into his pile, and it stood firm in the still air. He swiped his slick feet on the grass as he walked to the double glass doors. He slid them open as quietly as he could. In the kitchen, he stumbled on a ghost.