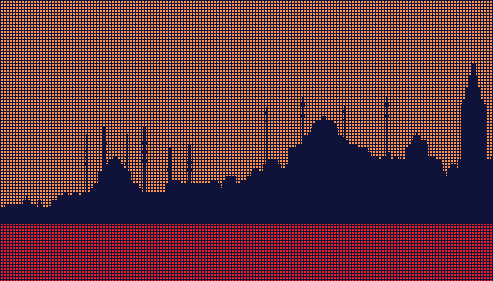 The tour group was now visiting the Pamukkale region, known for its thermal springs and archeological sites, about 600 km south of Istanbul. But Helen was hesitant to enjoy herself knowing that Aslan was absent and hurting. The tour guide called the hospital and learned that Aslan was doing well. The break in his leg required some tricky surgery but he had come out of it without complications. After Aslan’s ominous text the day before, he had sent Helen another warning saying it was too dangerous to continue their dialogue and that he would have some “friends” watch over her. He insisted she delete his previous messages and his contact info.

Darya, one of the Irano-American sisters, came up to Helen. “My dear, you look lost in thought. I suppose you are missing our little Bosnian friend” — by which she meant Aslan. “Perhaps there was a little romance starting?”

“Oh no, I just liked talking with him. He is so knowledgeable about history and geography. I am not in the market for romance.”

“Yes, I understand. When I lost my husband, it broke my heart too, but one learns to get on with life. We only have a few days left on our tour, so let’s have some fun! Tonight after the Whirling Dervish event, our hotel is giving a special discount on the Turkish bath spa. My sister and I will go and also Jasmin, if we can tear her away from her new husband. And of course, you’ll come. We’ll make it a party. A real girl’s night.”

“What about Maria?” Helen asked.

“Ah yes, Maria...I suppose it would be unkind not to invite her.” She bent down to whisper to Helen. “She is so tedious. We feel sorry for her poor husband Bruce. Maybe she won’t join in. With any luck the spa will be against her religion!”

So after an early dinner, the group was herded off to the Dervishes ceremony. There was a large Japanese group already seated, cameras and cellphones at the ready for photo ops despite signs banning photography. A man wearing a tall conical hat and long black robes came out to give a brief history of the mystical Sufi dance, which he equated to electrons and protons revolving throughout the universe. “As you can see by the posted signs, this is a religious ceremony and no photos are allowed until the end.”

Helen wondered at the spectacle. Six men and boys twirling at a dizzying speed, their white long skirts mushrooming out around them, with one palm up to the heavens and the other pointed to the earth. One Japanese lady could not restrain herself and snapped a picture, and then all around her flashes went off. One of the Persian sisters voiced her disapproval loudly, but then took a picture herself.

Afterwards, the tour women headed for the spa. It was a warren of rooms with clients and attendants bustling about. In the outer lounge room a noisy pre-wedding event was taking place — a large party of Turkish women were dancing, singing and frolicking, some in burqas and others wearing only towels.

“What fun they are having,” remarked Helen.

Darya replied, “It’s the one chance women get to bond and enjoy being free of their restrictive clothing. These girls are taking full advantage. Come on let’s enjoy the water.”

Helen’s group went straight to the hot pool. The room was beautifully appointed with aqua blue and gold mosaic flowers adorning the white tiled walls. Warm water gushed out of a lion’s-head faucet. From the pool some steps led up to an elevated marble platform where attendants were giving massages.

The sisters, Jasmin, and Helen started to strip off their clothes for the plunge into the steaming pool. Darya gasped as she saw the bruises and scratches on Jasmin’s arms and back. “My goodness girl, what happened to you?” she asked.