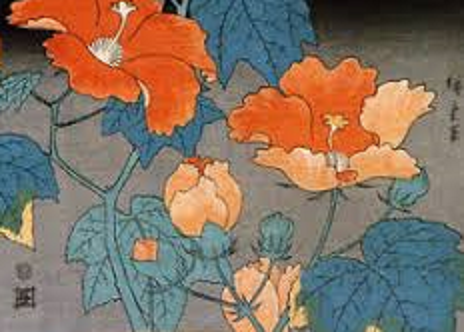 “I buy flowers every Thursday morning.”

Denny, of course, could not leave the matter at that. After we boarded the crowded express train, he pressed for a fuller explanation. I admitted it was the Takarazuka woman. And that I had thought she might be on the platform right then.

Denny knew whom I meant. Like me — like undoubtedly many people in our neighbourhood — Denny had occasionally noticed a woman, probably late twenties, made up as if she belonged to the Takarazuka theatre troupe. The performers are all women, including some, called otokoyaku, who play male roles. The fan base is almost entirely female, and I’ve never been to a performance. But from the posters it seems that even the otokoyaku do not really attempt to conceal that they too are beautiful women.

Our neighbourhood’s Takarazuka woman was always dressed, coiffed and made up in the distinctive otokoyaku style, as if about to step onto centre stage. I say “always,” but perhaps we only notice her when she’s specially decked out. After all, I recall seeing her less than a dozen times over a two-year period, even though I’ve been on the lookout.

Speaking quietly on the train, Denny pointed out that she’s not especially good looking. In a sense, I can accept that. “But you know how it is,” I said. “Sometimes when a sweet, feminine woman dresses in a mannish style, it emphasizes her femininity.” Anyway, do we ever know what really draws us to a woman? Their eyes? Their fragrance? Something not there at all? With the Takarazuka woman, something was there. But why pretend there is logic in matters of romance? Anyway, I am not one to overemphasize physical appearance.

I told Denny that when I did finally meet her, the attraction might well disappear. That’s what I said. But when I thought about the Takarazuka woman, my heart felt waves emanating outward from the self that lay beneath her contrived exterior. That fascinating self. In each facial expression, in the way she carried her arms, angled her chin, lifted her knees as she walked, I saw a sensibility that belonged to one who had known true suffering. A suffering she’d overcome mostly, but not fully, that had taught her not only compassion, but also her own need for compassion. A woman who could know me. The woman. I saw communication between our true selves that would go deep beyond deep, beyond all logic. It was this feeling — not the Takarazuka woman’s flamboyant appearance — that held the allure. She was the embodiment of womanhood insofar as relevant to my life. But I did not say that to Denny.

He asked what exactly was I planning. And why Thursdays.

I said I’d seen the Takarazuka woman four times when catching the 8:18 train, always on a Thursday, and that the next time I’d give her flowers. Today’s were, mainly, little red roses and variously-coloured carnations. I explained that I would bow politely and hand them over, saying only, tsumaranai mono degozaimasu-ga dōzo.

That’s the standard expression for gift giving. The formal version. Literally, “it is a trifling thing, but please...” That would be enough.