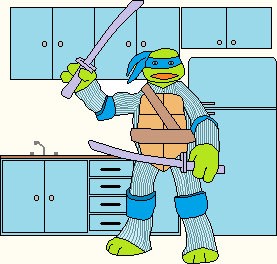 This story is not for the faint of heart. It chronicles a disappointment felt by few but feared by many. This story is also completely true. Nothing has been unnecessarily dramatized for entertainment purposes because the truth is far more gripping than any dramatization could be.

The story begins on a Saturday afternoon. It was summertime, and school had been out for three weeks. The day was as bright as it was free. It was as warm as it was open-ended. It was the perfect day to go outside, but there was no going outside on that day, at least not for the young boy who is the star of this story. He was a bright boy, a nine-year-old who like most boys his age in the early 1990s had a love for Nintendo videogames.

On this particular Saturday afternoon, this boy, let’s randomly give him the name Jonathan, was playing a videogame he had received as a Christmas gift from his aunt two years earlier. That game, which over time had become more of a curse than a gift, was Teenage Mutant Ninja Turtles. It was by far the most difficult game he had ever played. It was a game that required concentration, patience, deft reflexes and tremendous luck — and even that was not enough to conquer it.

Before we dive into this tale of ultimate highs and crippling lows, allow me to provide you with some insight into the Ninja Turtles videogame. Released by the Konami game company for the Nintendo Entertainment System in 1989, the game quickly gained a devoted following. However, this following was united not by love, but rather by hatred, a hatred felt by all those who attempted to defeat the game only to be left with patches of pulled hair, throbbing thumbs, and bruised knuckles from repeated punching against the nearest wall. To this day, if you ask anybody who was an original Nintendo player about Ninja Turtles, you will hear pained sighs followed by furious rumblings of how impossible that game was to beat. You will hear stories about how you could not even lie about beating it, for the shame that would go along with having that lie exposed would live far longer than the detestable slug who uttered it.

Getting back to the story at hand, on that particular Saturday afternoon, Jonathan felt a feeling he had never felt before. He wasn’t sure if it was the extra marshmallows in his bowl of sugary weekend cereal, or maybe it was the welcoming sun beaming through his window, but he felt like that was the day when he was going to do the impossible, he felt like that was the day he was going to finally beat Teenage Mutant Ninja Turtles.

With this unexplainable confidence in tow, Jonathan turned on his old color TV, blew into the bottom of the videogame — which you had to do with Nintendo to make sure the games would work without skipping or malfunctioning — then slipped the game into the console, pressed power, and began his quest. It was a quest he had previously failed to complete more times than he could remember.