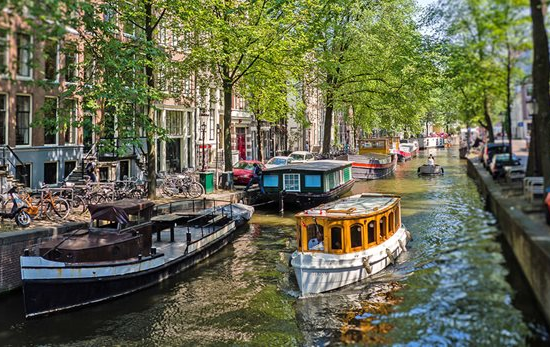 The wedding procession flooded down the sidewalk and spilled onto the street. The smiling young bride and groom held hands and swung their arms as they led a long train of well-wishers in a colourful parade, the entire troupe dressed in vintage formal wear of vibrant colours, with tall hats and dainty parasols and elegant handbags. A man carried a child on his shoulders. Several more children held their parents’ hands or skipped along next to them. There was a shaggy brown collie with a fluffy black bow tie fixed to his collar. I watched the procession as they reached the end of the street and poured into the park. The scene set a joyful tone to the afternoon and seemed in-character for this peaceful, enlightened city.

I had arrived in the morning on an early train from Paris. My travelling companion stayed behind to spend some time with her girlfriends in the South of France catching up on things. I was happy to escape. I had a longstanding curiosity about Amsterdam. I had always heard it spoken of reverentially by musician friends who had been here. My visit felt timely. The Western world was poised on the brink of decriminalizing a certain nefarious plant. But to a society that had taken those measures forty years earlier, that seemed like a childish controversy.

I rambled along in the sunshine over the padlock-adorned bridges and along the canals, admiring how the sun shone on the earth-tone colours of the narrow buildings, some of them tilting out of line like crooked teeth, braced up with wood and metal staples. Endless boxes of red and yellow flowers. A coachman sitting high in his carriage seat looked annoyed at being the subject of my photograph. An espresso at the Remember Me Café. After that, I remember gawking shyly at the ladies in the windows, some of them seated in their chairs staring down at their phones, others smiling and beckoning slyly like they had a secret to share.

When I returned to my room late in the afternoon it felt like I had walked thirty miles. It was past ten o’clock but I wasn’t sleepy and the sky was still bright and tinted blue. I recalled how the landlady had helped orientate me when I first arrived by pointing out where the grocery store was, the restaurants with the best food, where to catch the bus, and where the nearest coffee shops could be found. She smiled with this last bit of info and I knew she wasn’t talking about Starbucks. I ate a sandwich, stuffed a water bottle in my pocket, turned out the lights and walked out into the street again. I crossed several bridges, turned right and began a slow ramble up a nearly-deserted boulevard. Up ahead, a young woman with short blond hair was leaning over the front basket of her bicycle, one of her arms reaching into a brown leather shoulder-bag. I was a few strides beyond her when she called out “Mister! Mister! Do you have light?”