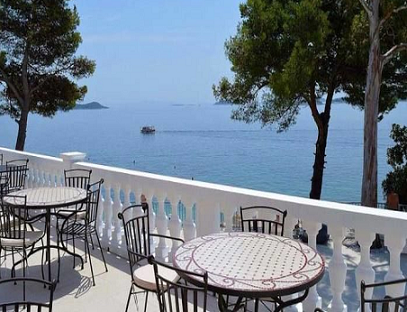 Damned seagulls!!! Danny’s head was pounding as he dragged himself off the lumpy, very uncomfortable bed and groaned his way to the kitchen sink to get some water. Obviously too much wine last night, he thought out loud. He carefully lifted the curtain and sunlight came pouring into the bedroom, which was also the kitchen and, let’s be honest, the dining room, of his tiny Airbnb apartment. Two enormous seagulls were duking it out over a dead fish on the beach right in front of the apartment. He could have leaped over the ledge, right into the aquamarine water if he wanted to. He didn’t want to. He wanted to curl up and die. Right, Danny thought, some sort of pain killers were called for. He gingerly made his way to the bathroom and found some ibuprofen in his shaving bag.

Medicated, he decided that he might as well get up and out. Maybe fresh air would help his hangover. He dressed slowly and painfully into shorts and a t-shirt and grabbed his satchel. Keys, wallet, phone, sunglasses, check. He picked up his camera too and his favourite lens. No lack of subject matter here to capture and he liked to be prepared for that perfect shot. There was a café just up the road that served breakfast and though food was not featuring prominently in his mind, coffee and orange juice were.

At the café, he sipped his coffee out on the terrace. It was good, but there wasn’t enough of it. Još jedno molim — one more please, he asked the waiter in his extremely limited Croatian.

Danny had come to the remote Island of Vis to check out the WW2 bunkers and tunnels. Yesterday, a jeep tour had taken him all around the island and despite the debilitating heat, he had enjoyed himself thoroughly. He was a fledgling photographer who was shooting and blogging his way through Dalmatia. Also on the tour was a laid-back Australian named Steve and before you could say two beers, they were mates. Steve dragged Danny from one café bar to the next. Steve drank only light beer but Danny loved the strong, intense, red Plavac Mali wine that the island was famous for and he drank more than his share. The plan was to have dinner at some point but the drinks and the conversation flowed and food was forgotten. Big mistake. Danny hadn’t imbibed that much since his university days. Now he knew why. He vaguely remembered stumbling back to his apartment last night while Steve went off in search of local girls.

Danny squinted over his phone in the already hot sun to try to read his latest emails. All around him locals were chatting and boats were revving their motors getting ready for the numerous tourist excursions out to the Blue Cave on nearby Biševo Island. A waitress approached his table to ask in flawless English if he required anything else. Danny, without looking up, mumbled “No thanks, just the bill and some peace and quiet.”

She shook her head, muttered something in her language and walked away quickly.

“Hey, wait, I didn’t mean to chase you away.” He got up to follow her. “I’m sorry. I just meant I need the bill and I need to go back to bed. Too much vino last night.”

The girl turned slowly and smiled. “Of course, sir.”