SEE ISSUE #27
FOR PART ONE OF
MISTER COMPLAINER
<
> 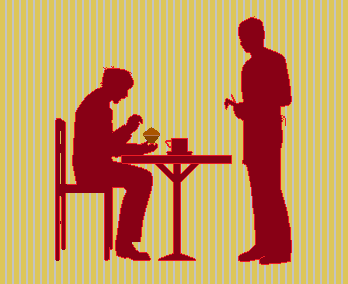 The banner said Little Johnny’s Café was under new management, but it was the only café Walt Bugleman ever went into, so he went in. He sat at a table hugging the wall on the left side of the café so he could see people come and go. He placed on the floor the bag that held the product he intended to return to Steinberg’s department store. He ordered his preferred espresso: “A flat white, please,” he told the waiter.

“And a muffin —” he glanced at the display cabinet, “— blueberry.”

“What happened to Little Johnny?”

The waiter, a teen stuck in that awkward place between boyhood and manhood, returned and placed the muffin on the table. The muffin, its bottom smaller than its top, wobbled and fell to the side. The boy, like a mother picking up a fallen child, picked it up and put it upright. Faux pas number one.

Walt looked at him in shock: “You touched it. I want a new one.”

The boy, shaken, apologised with trembling lips and stuttering vowels and brought a new muffin from the cabinet.

The boy returned with butter.

Several minutes passed. Walt craned his head past the other patrons to see where the boy was for he still needed his coffee to arrive. What was the muffin supposed to be? An appetiser? The boy finally returned with the coffee, holding the saucer in his left hand while the thumb and index finger of his right hand wrapped around the rim of the mug. Faux pas number two. Next he placed the coffee on the table with more force than he intended, spilling it over the rim of the mug and into the saucer. Faux pas three. Walt looked at him, eyebrows raised, forehead creased.

“Can I have saucer — another saucer?” Walt often said things twice. He felt it minimised the chance of his request being lost in translation, for he was an educated man and the average man was not.

“There’s a serviette there.” The boy pointed to the serviette under the muffin.

“It’s dirty — it has muffin oils and residue on it.”

The boy brought him a new saucer and several napkins as compensation. Walt wiped the serviette on his shirt as though to further clean it before wiping the rim of his cup. It had taken the boy five trips to complete the simplest of orders.

Walt cut his muffin in half to find only one blueberry, half of it on the left side and the other half on the right. This was the last straw! The boy, carrying a stack of dirty cups and plates, walked past and Walt flagged him down.

“There’s no blueberries in this blueberry muffin.”

“Will the other one be the same as this one?”

“Our chef makes them all the same.”

Walt clenched his teeth and breathed slowly. “Listen. First you give me my muffin with the serviette underneath it — what good’s a dirty serviette? Not to mention the dirty saucer. Then you maul my cup like an infant. Then you give me a blueberry muffin with just one blueberry — one! Tell me, are you naïve, inexperienced, or just plain incompetent?”

The boy stared at him.