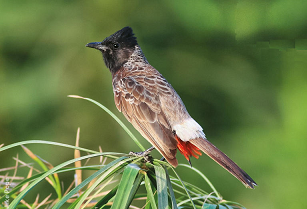 His satchel bouncing on his back, Yahiya was heading home when he noticed a boy flying a bird. It was a red-bottomed bulbul bird. Yahiya slowed down to get a close-up look. The boy carried the bulbul perched on a metre-long stick with colourful thread attached round the bird’s waist, and when the boy ran, the bird was on the wing, chasing the perch stick. Having a bulbul as a pet was such fun that it was every kid’s dream. The proud owners flaunted their bulbuls wherever they went. The only places off-limits for bulbuls were mosque and school.

Once a bulbul had spent a couple of weeks with its owner, the owner could detach the thread from the stick, then when the owner moved the stick, the bulbul would reflexively become airborne and continue to chase its perch, the loose thread dangling down its belly like a broken antenna.

Upon reaching home, Yahiya asked his father to buy him a bulbul.

“This is a cruel practice! The bulbuls feel stressed in captivity,” his father lectured.

Then Yahiya approached his mother for the money to buy a bulbul but she said she did not have any.

Yahiya bawled and rolled about the beaten-earth courtyard, but no one listened to his pleas.

Next day at school — Yahiya was in grade 4 — the students read and chanted a poem about a bulbul. The poem was lavishly illustrated with pictures of bulbuls, plants and flowers. Yahiya pictured himself flying with the red-bottomed bulbuls over the village green, pictured himself warbling, warbling like any other bulbul, flitting in the air and perching on branches.

Next morning Yahiya shouldered his schoolbag, took half a rupee from his mother and left. But instead of going to school, he went to his friend Haron’s house. They hid their schoolbags under wheat chaff in the barn there and darted towards the village orchards, stopping only to buy some dried date fruits from a shop along the way. The twosome climbed over the five-barred gate of the orchard and moved stealthily to a clump of guava trees that was famed for being a favorite haunt of the bulbuls. This orchard belonged to an old, hunchbacked neighbour who mostly kept to his adobe hut and was unaware of the boys encroaching upon his property.

The orchard was alive with the chirping of birds. The two boys slumped down in a grassy spot by the guava clump. They removed the stones from the dates, chewed the pulp into a stiff paste, rolled it into a small ball and stuck it on the tip of a stick which they planted in an old gnarly guava tree. Then they hid behind some bushes. After some time a pair of bulbuls landed on the stick and fell to pecking at the date-pulp lollipop, the two friends peering at the birds between the lacy branches all the while. Stomachs full, the bulbuls flew away. But in no time another pair arrived and found the feast on the stick.