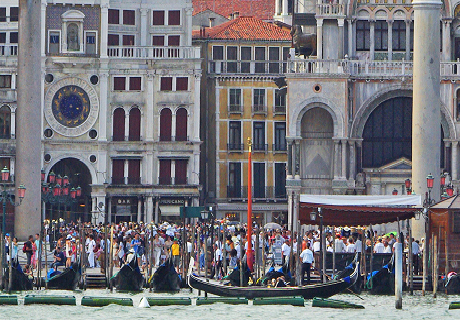 Stray cats spoiled his romantic notions of Venice. They fought all night, the cats did, somewhere beneath the window of the hostel where Mark stayed. Or at least they went through the preliminaries – staring each other down in the darkness, endlessly making that fierce, guttural, unnatural wail. Two nights in a row they kept him awake.

Perhaps weariness contributed to his disdain for Venice. By the third day of his visit, Mark could list a dozen reasons why the city fell short of expectation. Yet that afternoon, as he sat in a small park near the Jewish ghetto, it was a dog — of all things — that restored Venice’s romantic allure. Not precisely the dog itself but its owner.

A tall, red-brick wall encircled the park. She entered through the only gate, walked the beagle twice around the pathway, then sat on an old wooden bench, its dark green paint chipped and sprinkled with graffiti. Woman and dog, Mark noticed, had similar colouring. The dog had a bright, white belly and was covered with generous patches of black and brown. The woman wore a white sleeveless blouse, her skin was luxurious bronze — the result of much Adriatic sunshine — and her long hair was dark, almost as black as the short skirt and thick-soled shoes she wore.

She glanced at Mark. He quickly shifted his gaze but not before noticing a slim smile cast his way.

Lamentably, his first six weeks in Europe hadn’t presented much romance. This, too, was contrary to expectation. There was that woman in Barcelona — her eyes so big and round, her tawny pupils so impossibly large — but the affair hadn’t amounted to anything. It was one evening, that was all, followed by stinging humiliation.

Imagine going home, he thought for the tenth time in as many days, having slept with only one woman in all Europe. He shuddered, then took control of his fate and joined the woman with the beagle on her green bench.

She gave the foreigner a scrutinizing look. “Mark,” she repeated unsurely and then said: “Ah, Marco. Sì.”

“Sì,” Mark nodded. He hated the local variation of his name. It wasn’t the added “o” he found grating but the rolling “r” he could never master. He waited for the woman to reveal her name, yet she remained silent. Her only movement was to jiggle the beagle’s leash — to no effect and for no apparent reason.

The woman shrugged and raised her right hand a few inches, shaking it slightly from side to side, as if to say: Only a little.

Locals, he knew, down-played their English speaking abilities. “Très bien,” he said. He’d been in Nice before coming to Venice and didn’t know how to say very good in Italian. When he realized his mistake, he couldn’t correct it and hoped she hadn’t noticed. “I’m from Canada.”

An uncomfortable silence ensued. The wind blew. A leaf fell from an overhead tree. It landed on Mark’s leg and he brushed it off. Desperate for something to say, he asked: “You like Venice?”

She tilted her head and raised her left eyebrow. She nodded minutely but said nothing.

Mark wondered if he’d overestimated her English skills, then answered his own question: “Too many cats,” he said.