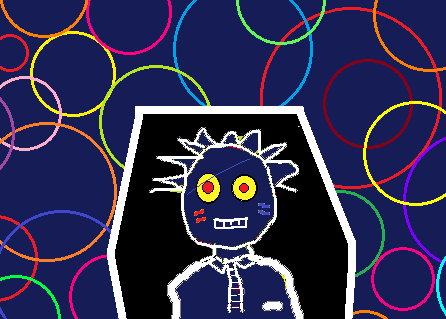 It would take me hours of slow wandering before I got anywhere, but I was not a man who moved quickly (or at all, as you’ll see) under the watchful eye of the public. As long as there was some forward movement, I’d find my way. And at exactly the moment I wanted to give up, at exactly the moment I realized I was lost, there it was. It was a slim building, scarcely larger than myself it seemed, with an exterior of rotting black wood. “Art Show” was painted in white paint across the door.

As I stepped towards it, the door burst open and out came a rush of high-society, snub-nosed men and women dressed in their evening best. They laughed as they smoked their cigarettes on long-tipped sticks and rushed past me, a dead fish floating in water.

At the door now was a man in a butler’s outfit, penguin tail and all. “Welcome,” he said. His eye sockets were filled with milky, pupil-less marbles. He held his hand out to the hallway behind him. “After you,” he said.

I peered in. There was nothing more than a dark narrow corridor leading to another door. I remember thinking I was standing at the precipice of another world, panic filling my being and bursting from my fingertips. If I had had time to decide, I might not have stepped forward as I did, but the butler began to close the door and I had no choice. The hallway went dark, except for the illumination from the cracks of the next door. I walked a few feet, turned the handle and passed through.

On the other side were the pale wooden walls of a sprawling, open gallery, washed in a clinical white light. Despite the previous high-society horde that escaped as I arrived, the room was still teeming with others, walking slowly and idly from one art piece to the next. Not wanting to bring attention to myself, I decided to blend in and do the same. Hands clasped behind my back, I walked through the gallery, passing by paintings of horse-headed men, giants playing marbles with earth-like globes, and one with a sun wearing sunglasses entitled Cool Dude, before stopping at a small alcove that held a single painting.

It was a pastel painting of a young man, who stared straight back at me, as if I had stumbled upon a mirror. He had the same blue eyes, dotted with grey, as if the artist went all sorts of Pollock across his pupils. Like me, he had the same shoulder-length blonde hair, parted down the middle. The collar of the identical suit that my grandfather gave me when I turned 18, the suit which I myself now wore, jutted up around his neck at the bottom of the portrait. I scratched my chin in wonderment and half expected the painting to do the same.

As I wondered where this work of art, this mysterious mirror, could have originated, I felt someone watching me. It was an old woman whom I could see in the reflection of the glass that covered the pastel portrait. She wore her hair in a high grey ponytail.

Then I noticed, not in the reflection now, but actually in the painting itself, a hand extending over my twin’s shoulder. At the same moment I felt the heat of her body invading my space. I imagined her fingers as they extended towards me. The veins of her hand were prominent blue tubes fighting their way to the surface, the blood cells alerted to the oxygen rich environment on the other side of her thin skin. It was an all you can eat buffet, the cells told one another. That hand, and those fingers, full of rebellious blood, stabbed a long cold finger into my shoulder. She kept it there, palpating the skin, testing it for realness.

“Hello? Boy? May I ask you a question?” Her voice was underweight and waning, barely crossing the gap from her mouth to my ear.