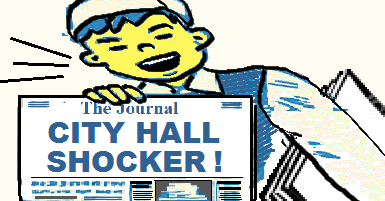 Queen of the Tabloids

She was the Tabloid Queen, and someone had the bright idea of hiring her to run our stodgy old small-city daily. She certainly caused a stir. Picture a piranha pool at mealtime.

She was young, blond, thin and pretty — not to mention relentless. She had a high-voltage personality and liked to get her way. Picture a steamroller with perfect teeth.

I had been at the Journal for 28 years when Debbie McIvor first marched into the newsroom. I was known as a survivor, having been spared the boot over countless rounds of layoffs.

The Journal was a family-owned newspaper when I arrived years ago to work as a copy editor. It was a busy, bustling enterprise back then, an aggressive but serious paper that regularly exposed corruption, uncovered scandals and unearthed government waste.

Those were glorious days for the Journal, but even then the writing was on the wall. It was one of the last independent papers in Ontario, and the owners faced enormous pressure to sell to one of the chains.

And it was ripe for the picking, with a top-heavy management structure consisting of a bewildering array of executives with imprecisely defined responsibilities. The members of this bloated body had two clear priorities: golf and happy hour.

Enter Annie, a squat, big-haired classified advertising clerk who managed to drain the Journal of $3 million over several years in a not-terribly-sophisticated fraud scheme that went undetected while the executives worked on their putting. By the time Annie’s larceny was discovered, it was too late. The damage had been done and the owners had to put the paper on the block.

Over the next several years, a succession of companies bought the paper and scythed their way through the worker ranks with relentless efficiency.

The newsroom was hit especially hard with layoffs. Not surprisingly, the investigative pieces went out the window, replaced by hard-hitting coverage of dog shows, store openings, volunteer appreciation nights and parades of any kind.

The vast majority of the 125,000 people in the community responded to the decline in editorial quality by becoming staunch, even enthusiastic, non-subscribers.

That’s when Debbie entered the picture. She had returned home to Canada after having worked for 10 years at tabloids in England, arguably home to the sleaziest scandal sheets in the world.

I was eventually able to piece together a portrait of her UK years, based on her own British blog (called The Tabloid Queen) plus information gleaned from the Internet.

She learned the reporting craft at some mid-sized papers in northern England, then was hired at one of the national tabs in London. Debbie pawed through celebrities’ trash, staked out hotels and crashed high-profile weddings — all in an effort to dig up dirt. She once feigned injury in front of Victoria Beckham’s limo and was invited inside long enough to elicit sufficient information for a 600-word story.

But Debbie’s specialty was making people cry. It didn’t matter whether she was interviewing a fallen movie star, a disgraced politician or a crime victim, Debbie knew how to trigger the waterworks. Her colleagues called her “the Tearjerker.”

After suffering a genuine injury — she broke her ankle while pursuing film celeb Hugh Grant — Debbie was transferred to the copy desk, where she developed an affinity for tarting up limp stories and cranking out crazy headlines. She worked her way up to middle management in the newsroom.

Exactly why she left Britain and accepted a job as managing editor at a down-in-the-mouth Ontario daily, Debbie never said. She arrived at the Journal when circulation had fallen off a cliff. Fifteen journalists rattled around a cavernous newsroom that once held 50.

So when Debbie entered our drab little world, her first task was to defibrillate the whole languid lot of us. If nothing else, she did accomplish that — eventually. She zapped some life into us through the sheer force of her personality.