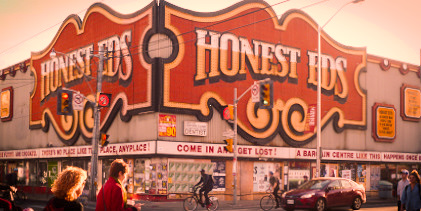 Toronto is my home. I just don’t live there anymore. Edmonton has been good to me, but I’m not from Edmonton. When I travel and people ask, “Where are you from?” I always say I’m a Toronto girl, but I live in Edmonton.

In the fall of 2017, then, I went home. I wanted to see the red maples scorch the sky and travel to the Islands on the big ferries that used to cost a quarter to take you to the rustic pleasures of sand, water and woods. And I had an aged aunt to check on. Well, she’s not really my aunt. You know the story: a mother introduces a best friend to her little girl and says, “You can call her Auntie.” So that’s what I did and still do. She has become my last human connection to Toronto past. To me she is still Tante Ana. In her presence, I am still 10 years old, and Toronto is, quite simply, all there is. It is my world. Houses of brick and stone, an incessant garble of languages, trees canopying the streets, squirrels, laneways, and dripping summer heat. Toronto was the soil for my growing footprints and the concrete landscape behind every youthful memory of the ‘me’ inside the ‘I’. It was my front door when I graduated Grade 13 and set my sights on the ivy-covered stones of U of T. It was my back door when I crept home after one too many drinks at the Brunswick House, and sometimes it was, literally, my basement window when I squeezed in after a night of necking in Christie Pits Park.

I decided to walk to Tante Ana’s house in the Junction starting out from my hotel around Spadina and Bloor. It was a warm October morning. I planned to head along Bloor Street to Keele then turn up past Dundas Street West — a goodly distance for some, but for me the perfect start to my trip back to the old country.

As I approached Bathurst Street, I was waiting for the gigantic orange signs of Honest Ed’s, the famous bargain store started up by Ed Mirvish in the late 1940s, to come into view. It was Honest Ed’s, two words of emotional tinder, that supplied the entire neighbourhood and beyond with the wherewithal to sustain a family and keep dreams alive. Gaudy, brazen, lit up like vaudeville in Vegas and loaded with joke signs such as “Honest Ed attracts squirrels. They think he’s nuts.” I had spent many a Saturday there, meeting friends and maneuvering through the seriously crooked and tilted floors and stairs looking for deals. What was new this day was all the plywood boards lining the walls. This was my first sign that the fundaments were moving, that I was perishable. I stood gazing at the somber lump that had once sparkled and beckoned. How could it possibly be closed, and not for renovations, but for demolition? I wandered around the edges of the building that had dominated this corner for over six decades reading the posters and trying to look through blackened windows. One poster, actually in the Honest Ed style, said “If you’re reading this, you’re too late.” I took out my camera. Picture after picture would not turn its lights back on. Click after click, like the paddles of a defibrillator, would not bring it back to life.

It seemed as if a family heirloom had been snatched from me. I took the proverbial long last look and left this nostalgia vortex.

Too dispirited now for the planned hike, I boarded the subway. Exiting at Keele Station, I breathed in the balm of familiar sights. Same old convenience store, now stacked with pumpkins, and, of course, High Park still seared in red and orange. I walked north toward Tante Ana’s home, the home she had lived in for over 60 years. Same house, same street, same indomitable woman. It’s always so much easier when things stay the same.

Liquor was once banned in this neighbourhood but now it seemed to abound, judging by all the pubs lining the streets on Google maps. But the old railroad bridge still served as the landmark for me to turn onto her street. In the midst of railroads and industry, that street was once described as the ugliest street in Toronto, but to me it meant heaven, an afternoon of tea and stories about escaping East Germany and what Toronto was like in the 50s and 60s. When Tante Ana’s house came into view, Time stood still.

I took my time, savouring the lingering roses on front lawns and enjoying the busyness of the squirrels. House after house of old brick warmed my sight. Turning into her walkway, I stopped suddenly in front of the crumbling cement steps. The door was closed shut.

You would have to know Tante Ana to know how odd this was. I opened the screen door and delivered several challenging knocks against the offensive sight.

Impossible. A quick peek through the winter-grimed front window showed me a world I had known since age nine: the same thrift-store couch, same garage-sale china, and the plastic yellow roses still graced the dining room table bought at the Salvation Army store long ago. I went blank.

“Excuse me. Are you looking for the old lady who used to live here?”

Used to. With real reluctance, I turned around and said, “Yes. The door...it shouldn’t be closed.”

“It’s locked up. I rent next door. The lady died last spring.”